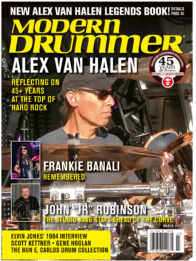 Legendary guitarist Jimi Hendrix passed away fifty years ago. This seems unimaginable, as his music, message, and influence are just as powerful and relevant today as they were during his few short years leading a musical revolution for freedom of expression for a young baby boomer generation. The Jimi Hendrix Experience, a multicultural, multiracial power trio, successfully reimagined blues, funk, rock, jazz, and R&B in a powerfully poetic, experimental, political, yet unifying musical platform for peace, love, and oneness.

In a tribute to Hendrix's musical legacy, bassist Brian Bromberg has remastered his 2012 Bromberg Plays Hendrix recording, in which he recruited master drummer Vinnie Colaiuta to share in the instrumental reinvention of a selection of classic Hendrix tracks, including "Fire", "Crosstown Traffic", "Manic Depression", "Hey Joe", "Foxy Lady", and "The Wind Cries Mary".

When I would hear a drummer like Mitch Mitchell play with Hendrix when I was young, I would get excited and be inspired by it. It didn't matter if they played simple or complex because it was all fresh. There was something very authentic and disruptive in its originality before drumming seemed to become formulaic. And, as aggressive as Hendrix's music could be, it was expressed in a unique way so that the music could be transformative. Hendrix was like a comet that appeared on the scene, right on time, and left a deep, indelible crater. And Mitch was a big part of that.

My approach to playing on this recording was to basically tip my hat to the original recordings while also being myself. Whenever I go into any recording environment, I'm a blank slate.

I grew up with these songs, and i played with a certain respect to Mitch, but also did my own thing and wanted to have some fun in the process. Brian and I both grew up in this musical era and knew the proper sensibility to bring to this style of music. There are some drum breaks throughout my tracks that may have a certain complexity but are still metrically digestible. Some people may even say, "He's playing too generic". But I'm not trying to stump the band here. I'm making a record based on an artist that was a pop phenomenon. Hendrix played with his arms wide open, not crossed in front of his chest. Mitch's style was such an imprint on that sound that it can't be ignored. And it would have been a travesty to ignore it on this recording.

As a session player, Vinnie's deep discography encompasses countless musical genres. And, similar to Hendrix, Vinnie has broken musical barriers and pioneered a rhythmic landscape that crosses genre divides and unifies the most diverse stylistic differences liek no other drummer in modern times. But 2020 was a much different working environment than any other, with an international health crisis changing the way we all interacted and navigated the uncharted waters of a lockdown lifestyle.

Even the greatest of session drummers felt the cultural and financial aftershock of the pandemic.

Lately, work has been a lot slower because we're all in isolation. There are some studios that have started to open again, but it's been very slow.

One of my most recent recordings was with Jeff Beck and Johnny Depp, called Isolation. That was a lot of fun. The Oz Noy Snapdragon recording was great. It was really about just making the music feel good. The music dictates what I play, and I only hope that I can do it justice. I also played on the David Sancious' Eyes Wide Open recording. One of the tracks, "War In Heaven", was actually recorded about twenty years ago, and another track was recorded earlier this year. David does some singing on it, and it's very cool, funky fusion.

When asked if anything has inspired him to elevate his drumming to new heights lately, Vinnie responded:

I really don't even know if I go to a 'next level' on anything I do anymore, because I don't even think like that. I go in and just do what I do. I always go in with an open mind and don't place any judgement on the music. I don't ever think like, Wow, I just broke some new ground. I'm not sure if I've passed that point or not.

It might be difficult for some to fathom me saying this, but it's just how I feel. I mean, I had great fun doing the John Beasley MONK'estra project, which was very jazzy. And the Jeff Beck and Johnny Depp thing was great because it has this big, powerful rock sound. The Lari Basilio record Far More was really nice. She was wonderful to work with, and it was great to work with my buddies Nathan East and Greg Phillinganes on that one.

I also did a really cool workshop class with Alan Persons so they could see us recording from start to finish and experience the whole process of recording, arranging, and completing the track. But for me, it's really about how good the music makes you feel. And when you feel good when you're doing it, that's really the criteria that matters the most to me now.

When asked if retirement from drumming ever enters his mind, Vinnie says Not really. I don't really think like that. Because I've been locked down for several months and just relaxing. I kind of like it. And part of me wants to just create on my own terms. That doesn't mean that I want to lack discipline. But in terms of retiring and completely leaving it alone, I just don't know. I haven't really thought about it. I'm definitely not the type with a burning desire to go out and perform and have people watch and applaud. I've always wanted to just play music, record it, and document it. I just want to get inside the music and play great music that emotively satisfies me. But in terms of retiring from the touring? Maybe. I've done it for so long, and the grind can be debilittating and really takes a lot out of you. We'll see what happens when things begin to open up again.